This success story is from Andrew, VK3FS.  Thanks Andrew…

Whether it’s an annoying buzz or hum, radio interference can certainly diminish enjoyment of our hobby. Finding it and getting it fixed can be one of those challenges that can really try us, but it need not be. This is the story of my local QRM and how I fixed it.

Every so often, a loud hum would open the squelch on my 2 metre FM radio. This would happen at all hours of the day and night, and after several months, it wore a bit thin. The interference or QRM sounded like a 50Hz hum that seemed to increase and decrease in amplitude. It came and went over many months to the point where I’d almost forgotten about it. and then, when i least expected it, it was back with a vengeance. It had taken what seemed to be 5 or 6 months before I decided to get off my backside and do something about it.

In a previous life, I’d been a keen foxhunter, that’s amateur radio radio direction finding before you start emailing. At least two decades of my post-uni, amateur radio life had been spent chasing radio transmitters through the parks and gardens of Melbourne and beyond. I’d built many ‘sniffers’, antennas, pre-amps and the odd fox (transmitter). I’ve even made the pilgrimage to South Australia for the National Championships a few times, and even got the sport on TV, remember Clive Robertsons World Tonight? That’s a story for another time. I digress….

One of the best things for monitoring interference is a SDR radio. Sofware Defined Radios are usually computer controlled radios which are controlled by 3rd party party software. I have a 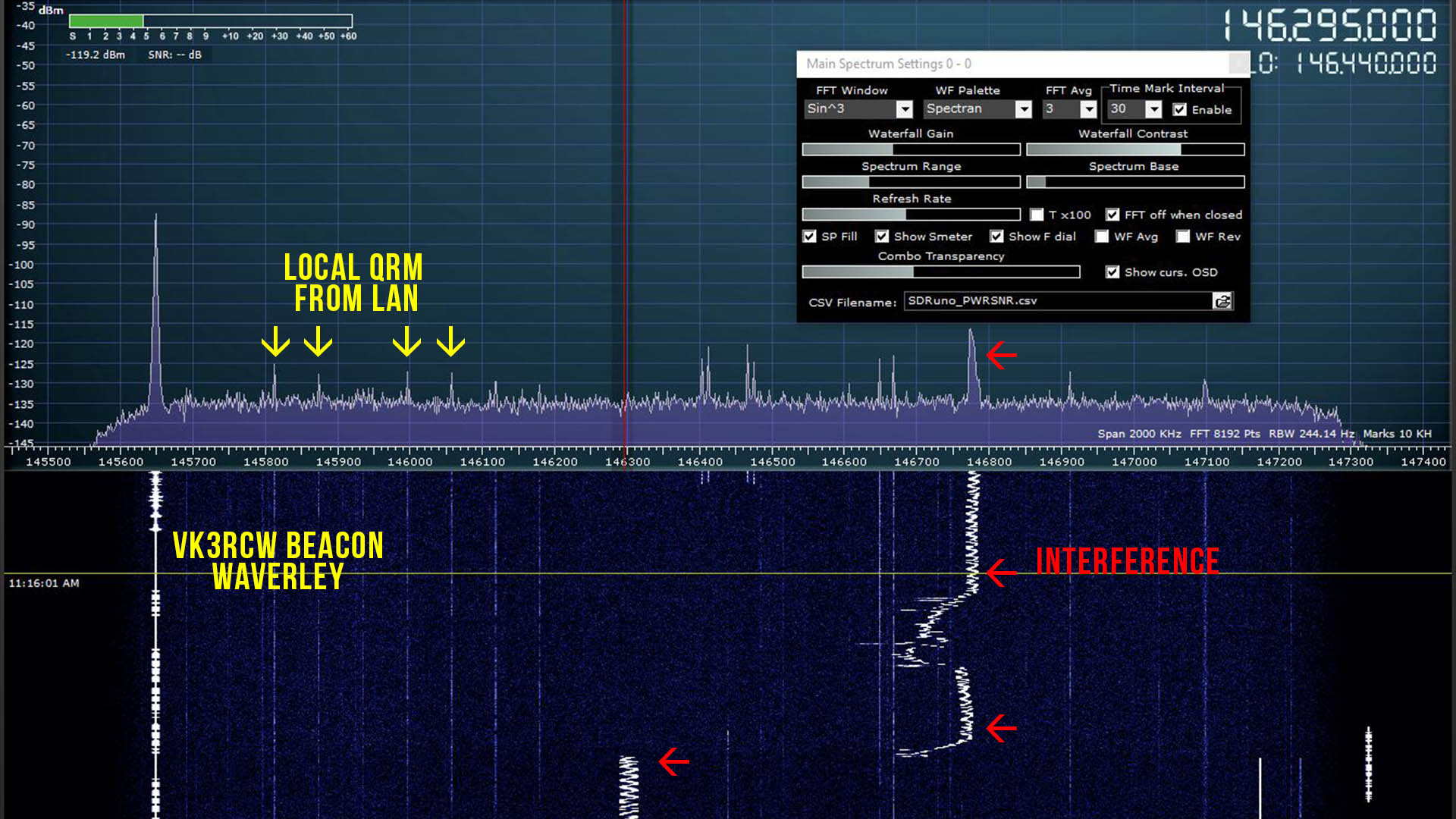 RSP1 which is controlled by SDRuno What you’ll see on this page is videos and screen grabs of the software in action. I also have an I
C-9700 which is also a new generation SDR from Icom. It is connected to a rotatable 2m yagi. Finally, I have a few two metre sniffers, these are 3 element, 2m yagis with a receiver that converts the strength of the radio signal to an audio frequency. The stronger the signal, the higher the tone. For this exercise I used a VK3YNG sniffer.

The Task At Hand

It was Saturday 28th of September. The QRM had just broken the squelch on the FM box so I decided to swing the beam around and see if I could get a direcion on the interference. Initially I thought it may be local, so after a few quick tests, like turning off the network router and modem etc, it didn’t go away. The signal on the 9700 was very strong, and very wide. From my QTH I had a good northerly bearing.

Tracking down interference can be one of the most challenging tasks in the hobby of amateur radio. Some sources of interference are constant, others vary. Sometimes interference can shift frequency, like in this case, and some are rock solid. Some cases can even be right under your nose or many miles away. Some can even be temporary – at a roadworks site or construction area.

The SDR (pictured) shows the interference. Click the image to enlarge it and you’ll see the the CW beacon in Waverley, some 50km away, some local LAN noise, and the offending QRM. The waterfall shows it drifting all over the band.

Having determined the source of the interference was not local, I grabbed a sniffer out of the garage and swung it around to see if the direction of the inteference matched that of the yagi on the 9700. It did – a heading of 5ø appoximately. So it was time to scare the neighbours and go for a walk down the street. What could it be? Someone’s cheap LED downlights? A solar inverter maybe? 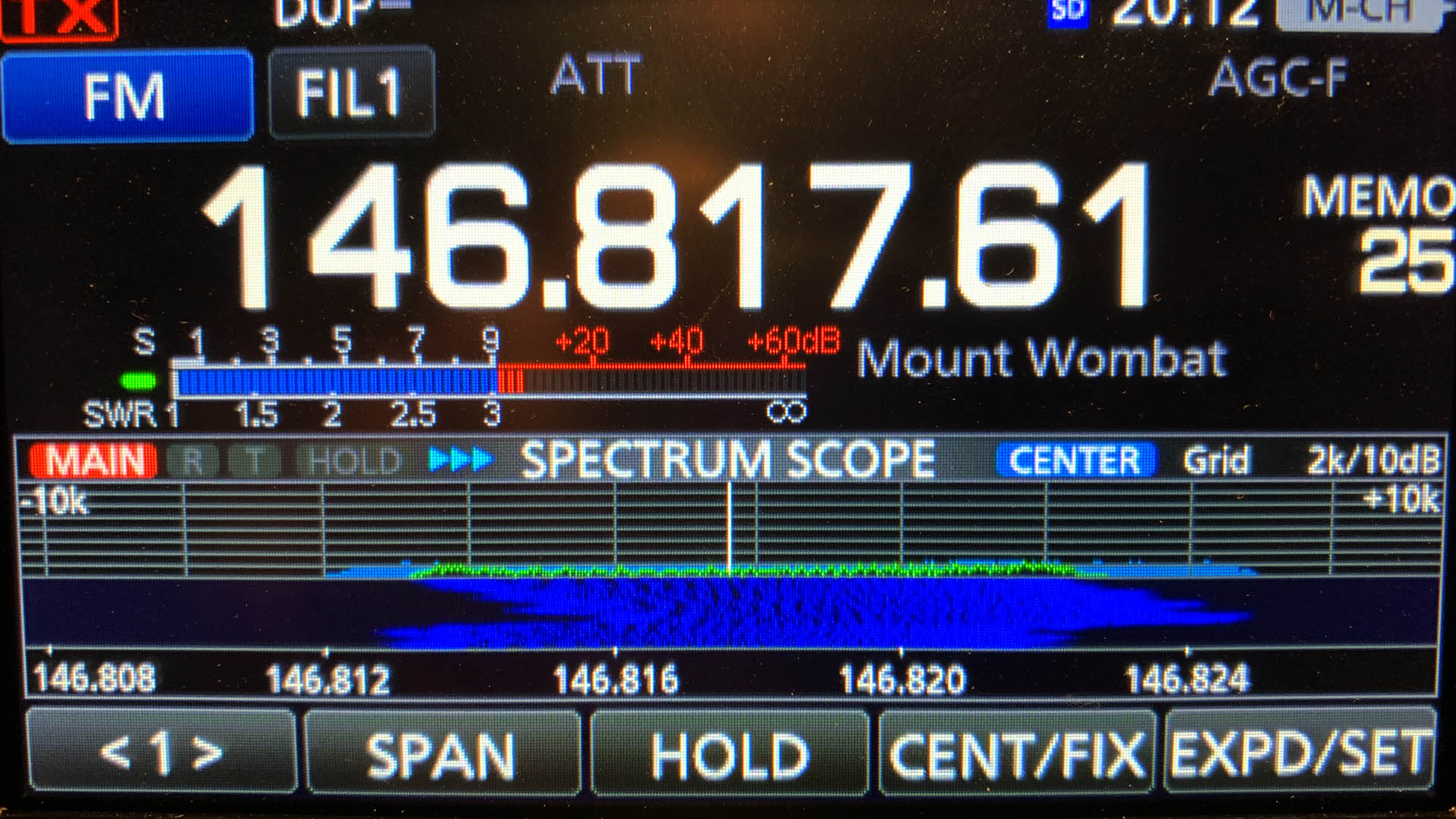 I’d walked about 1km and soon realised this signal wasn’t as local as I thought, so i walk back home, grabbed a hand held, and jumped in the car. After a quick look at Google Maps, I drove about 2 km north of my QTH monitoring the signal all the time on the dual bander in the car. The signal was getting very strong near a local primary school. Hmmm, a security monitor maybe?

It was time for a stroll with the sniffer through the school.

Remembering just how much fun fox hunting was, I headed of into the primary school armed with a sniffer and a hand held. As the frequency drifted I could follow it on the hand held, and the dial it in to the YNG sniffer. At home I was range 1, a measure of attenuation. Not very much. In the school, I was range 4 to 5, which is extremely close! It was dark, and as I emerged at a gate on the other side of a playground, I was in a street with only a few residential h 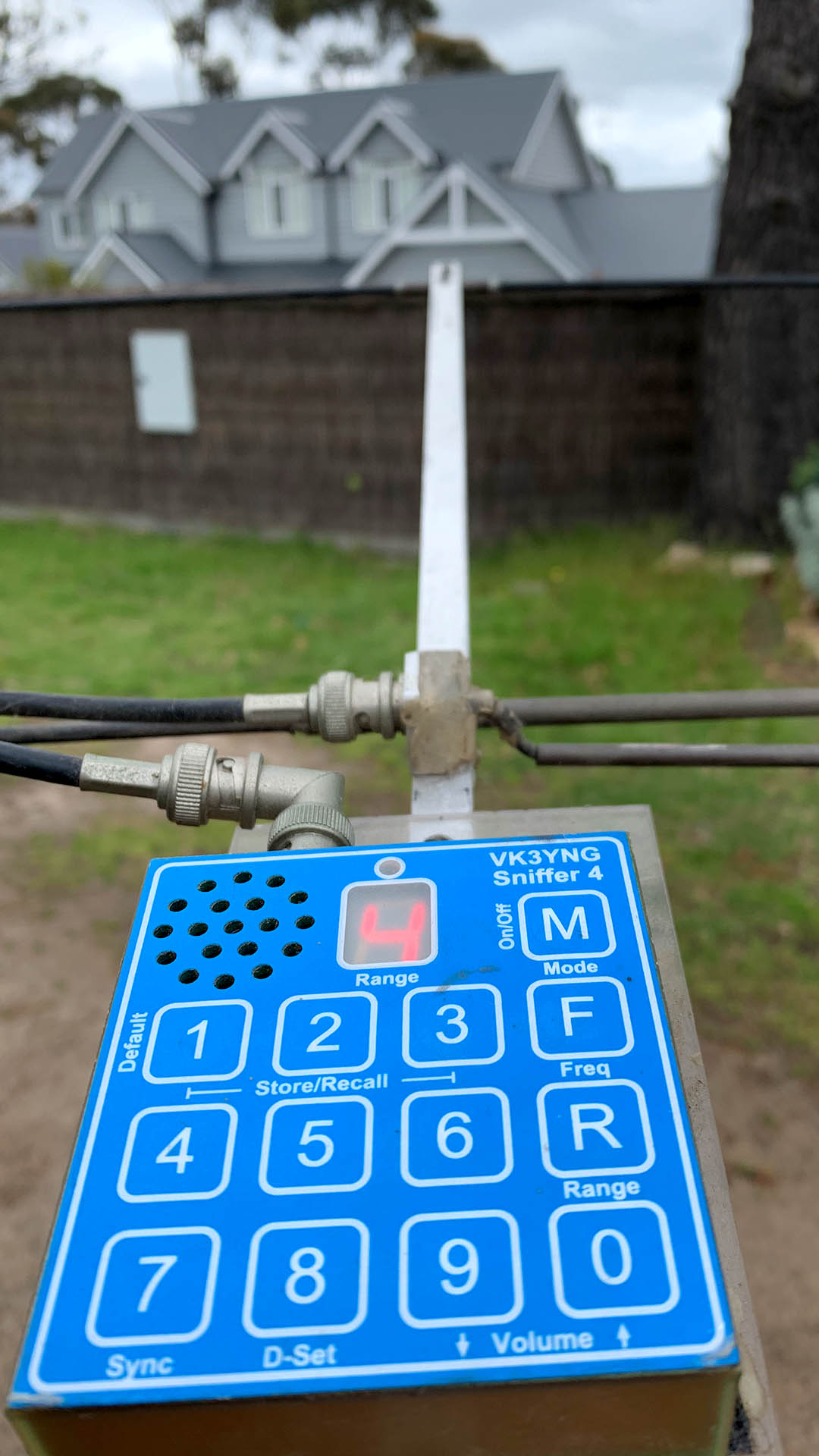 I could go no further. A wall of fenced houses and gated driveways meant I had to get to the other side of the houses to confirm the source, so back to the car I went.

Now back in the car, the interference was full scale on both handheld and mobile.

A quick look at Google Maps showed there was no road behind these properties as I was in a semi rural area. The best I could to was either side. Having driven to a few streets at right angles to the source, the sniffer was pointing back to one house in particular. At this stage, I figured I’d nailed it. I kept going back to the same two story house which was very new. It still had the builder’s sign up out the front. So that was the Saturday night sucess. Tomorrow, I’d come back in the daylight to confirm  my suspicions.

A quick return visit on 29th Sunday confirmed the source of the interference. So it was time to call in the ACMA to do the approriate door knocking.

The ACMA has, or had a form on their website to lodge a request to investigate interference. I say had because between solving this problem and writing this page, the ACMA webpage has undergone a revamp. It maybe there, but Google returns 404s. On Sunday night I filled out the form and received an email confirmation. ACMA want as much information as you can give them. Like most organisations they’re resource strapped. Here’s a snippit from the acknowledgement email showing the type of information supplied. 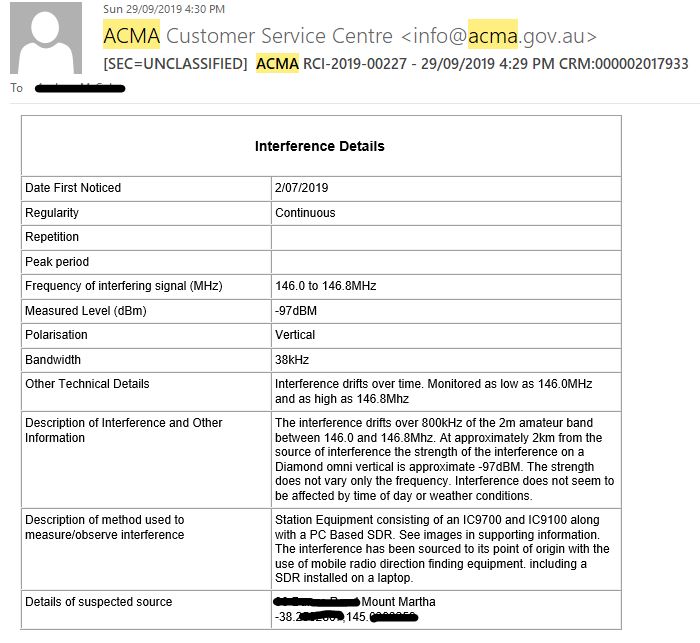 The following Tuesday, 1 October, I received a call from the local Radio Inspector. He said he was in the area the following morning and would take a look. There was a brief Q&A session just to get a little more information. On my arrival home after work on 2 October, I was pleasantly surprised to find the QRM was gone. The band was free of nasty hum and annoying squelch opening buzzes. I was suitably impressed that notifying ACMA on Sunday resulted in a solution by Wednesday. Just 4 days!

A few days later I received a follow up phone call from ACMA. The culprit was a cheap masthead TV amplifier that coupled itself into the TV antenna which was pointing north to the TV transmitter straight up Peninsula Link. This explained why the QRM could be heard 10 to 15 km away. The owner was asked to replace it. I’m guessing they have.

QRM guru is an online educational and general information resource by RASA.

Thanks again Andrew, and congratulations on a successful outcome.