On a recent visit to Aldi, I couldn’t help but notice some new products stacked up in the centre aisle. 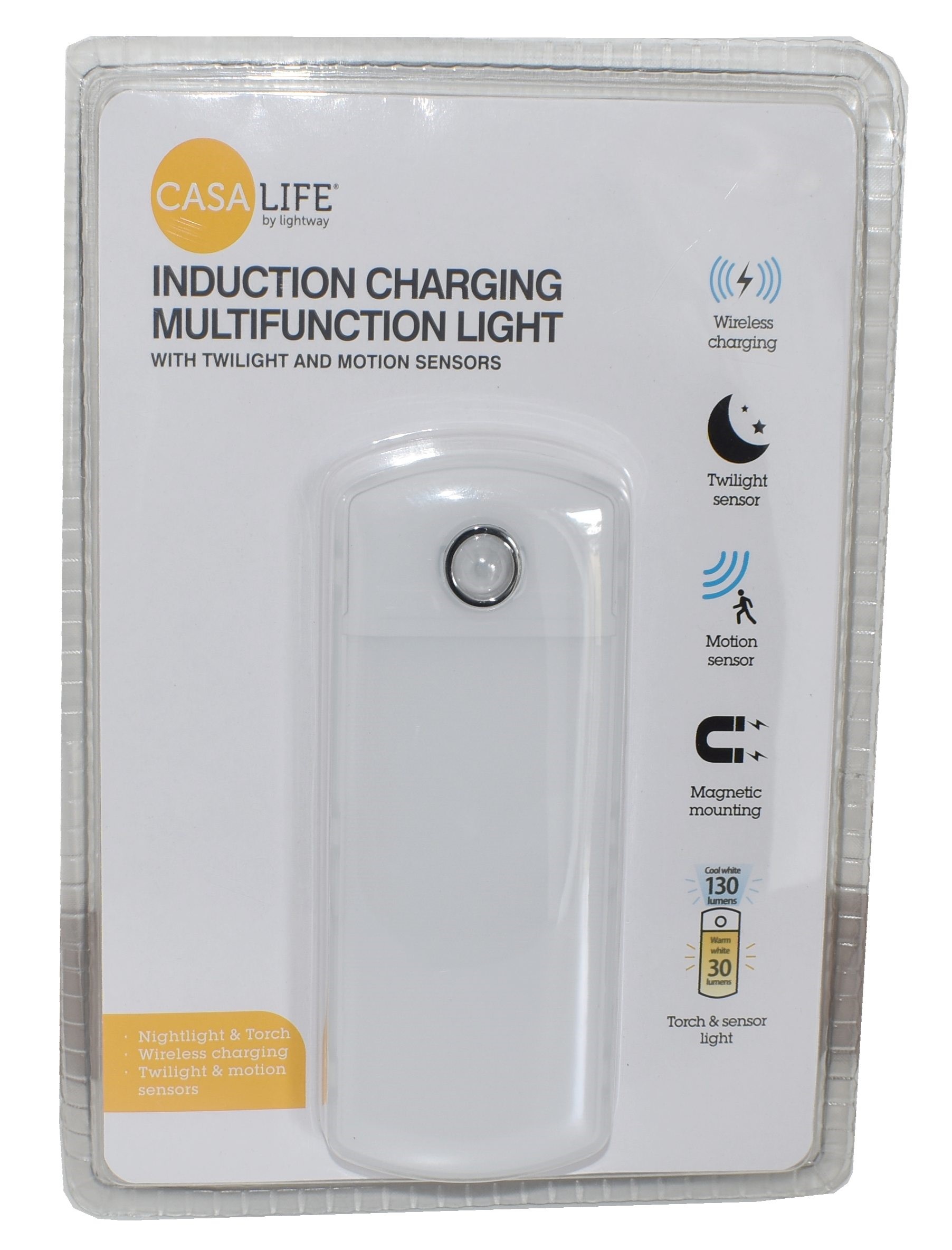 There was a handheld LED lantern and a wall-mounted emergency lamp.  The larger lamp had warm-white and colour-changing modes.  The smaller unit plugged into an electrical outlet and activated automatically with proximity movement or mains failure.   They were inexpensive at around $15 each.  What caught my attention was that both units used wireless induction charging technology.

More of this cheap imported technology is creeping into our households and I was sceptical of the impact it may or may not have on Amateur Radio receivers.  Would these be like the terrible switch-mode Christmas lights that wreak havoc on HF – but do it all year round?  Or would they be a useful addition to the shack.  I wanted to find out, so I purchased these products for testing purposes.

The larger lantern unit came with a USB style cable so that it could charge from a PC, wall adapter or USB battery pack.  Like many of these units, it sat neatly in a base unit for charging.  A touch on the side of the lamp activated white, warm-white or colour changing light.  It was actually an attractive looking unit. 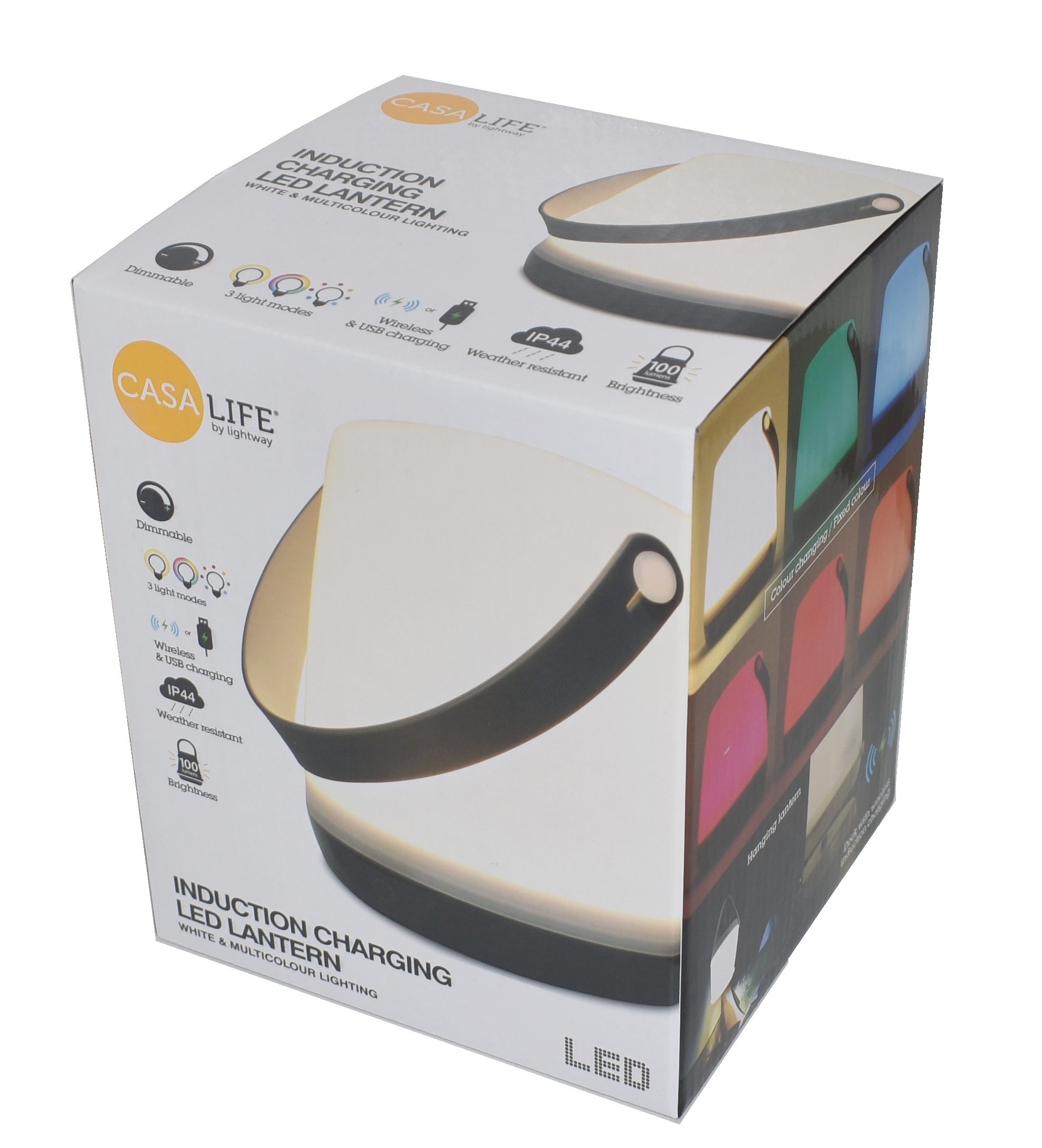 Undoubtedly, there was some type of induction coil in the base that would couple to another coil in the lamp, rectifying a current to charge the battery.  I had visions of S9 noise on all bands.

This didn’t happen.  I switched between bands and could not detect any noise when the charger was engaged.  Even when an internal antenna wire was strung up in the shack it was all clear on the RF front!

This simple test was repeated with the wall charging lamp.  The induction charging cradle was attached to a 2-pin plug in a 230V power outlet.  It was actually quite clever.  There was a light sensor working with a passive infrared movement sensor so that movement in the dark would briefly trigger the lamp.

A row of high-intensity LEDs at one end acted as a spot-lamp that would trigger automatically during a power failure.

Presumably several of these around the household could form a basic emergency lighting service.

I have low faith in the CE and FCC labelling that accompanies our cheap imported products.   Yet this appliance had no apparent QRM impact on all the regular amateur bands.  The energy was obviously coupling from the charger to the lamp on some part of the spectrum.  It was time to escalate these tests to the next level.

Using the Rigol 815 spectrum analyser and a combination of antennas and pickup coils, the RF spectrum was analysed looking for spikes present when the charger was engaged.  No significant RF signals were measured – even into UHF.

Only when the range was reduced to low in the spectrum could signals be observed.  In the 10KHz to 1MHz range there was a low-level series of spikes.  They began at 116 KHz and repeated at 116KHz intervals before petering out just short of 2 MHz. 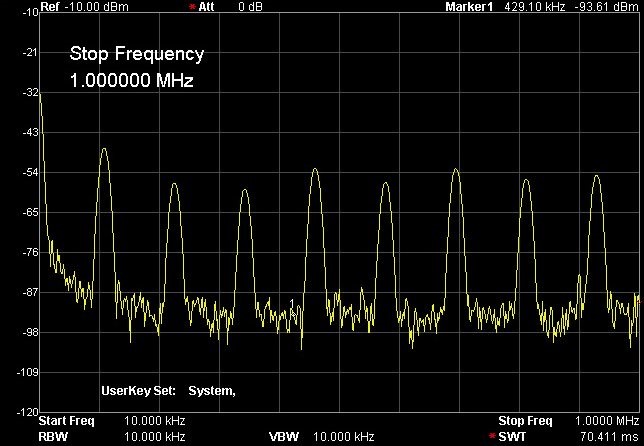 The RF levels were low and I had to get quite close to each light to capture these measurements.

The next step was to find out what was going on inside these units.  After removing the rubber feet from the lamp base, four screws were found to be holding the unit together.

There was not much inside.  A coil and a small circuit board.  At least I could see that the main coupling point was close to the centre of the unit.  The energy levels involved must be very small indeed. 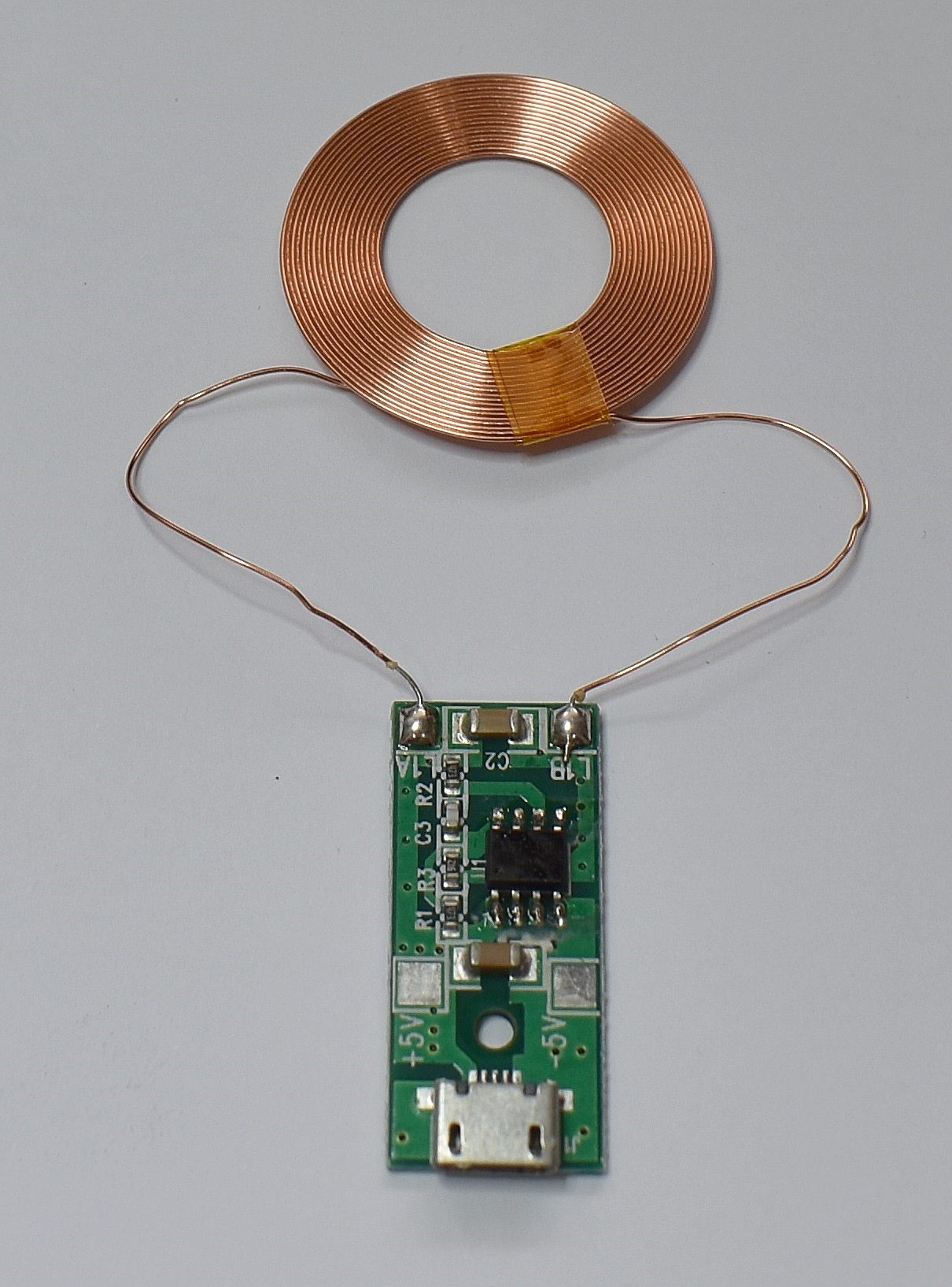 The circuit board had a single chip on it.  It was a basic modulator that would pulse the coil in an effort to generate a usable magnetic field.  Starting with a low 5V power rail from a USB port it didn’t give the designers much to work with, but it had to be doing something worthwhile.

I wanted to see what kind of waveform was being delivered to that coil.  An oscilloscope is a better tool for this type of discovery, so I hooked it to the Keysight 1204G scope and analysed the output. 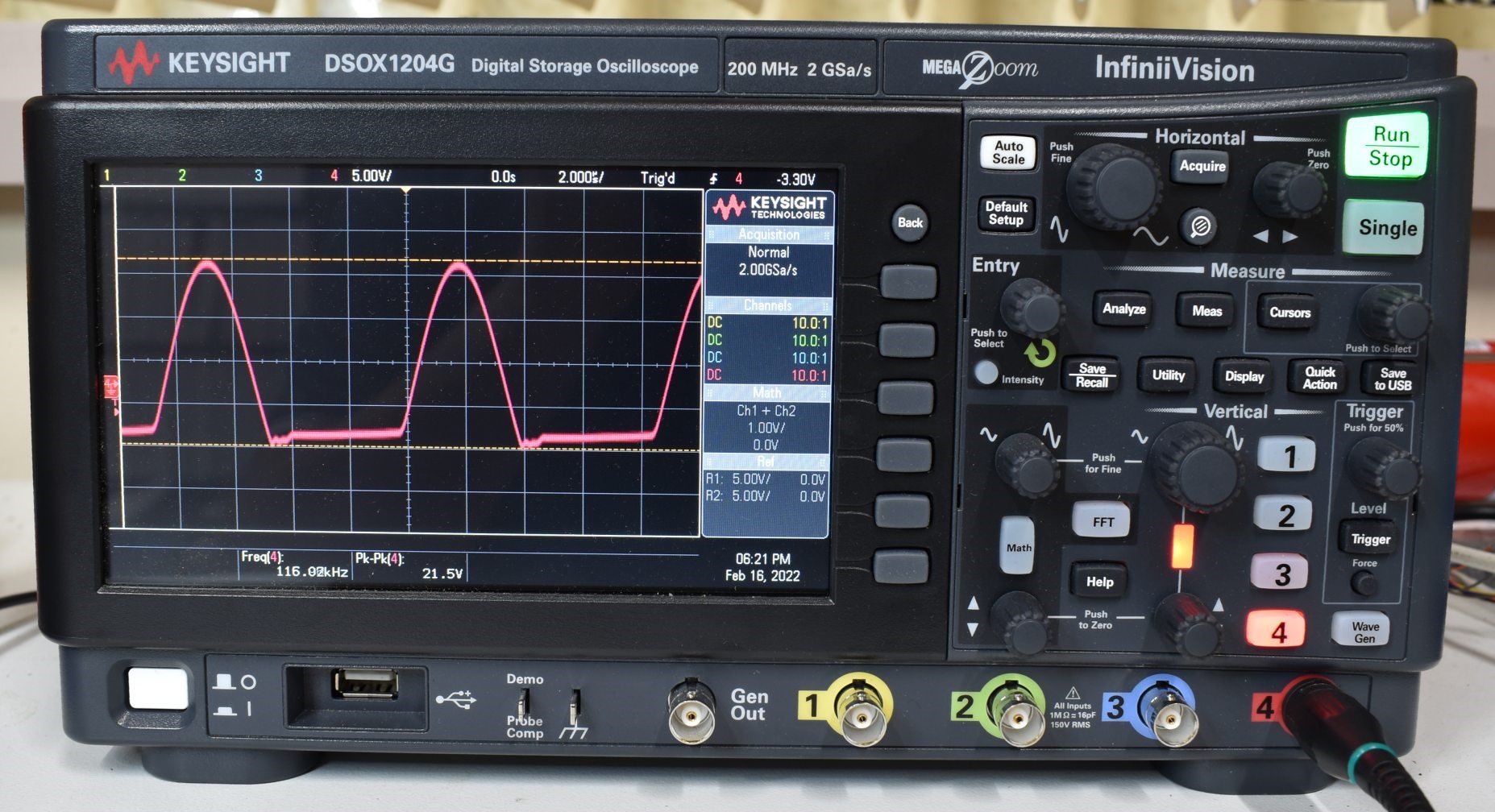 What I saw was a reasonable clean pulse train at 116 KHz, just as I had seen as the fundamental frequency with the spectrum analyser.  The device had stepped up the 5V supply to produce a 21V peak signal into the coil.

Whenever the coil was being pulsed, the circuit was generating harmonics, but they did not reach far into the RF spectrum.  Presumably the harmonic energy also adds to the charging current.  The chip (only 4mm x 5mm) was very faintly engraved with a part number (which I could make out under a microscope).  It was an XKT-510;  a dedicated CMOS induction charging device.  It had some smarts in it to track outgoing coil current. Detail on the device is scarce, but it seems to fold back its drive level if the target coil is not detected

Overall, it was a simple but clever circuit.  As always, I am astounded that such things can be made on the far side of our planet and delivered to our supermarket, presumably for a profit, for under $15.  From an RF perspective, I didn’t see anything that would curtail my Amateur Radio activities.

I’m tempted to go back to the store and purchase another one.  It also looks like I get to keep my electric toothbrush which appears to use the same technology.  Low-current induction charging seems fine for low energy appliances used infrequently, but if companies roll out wireless charging for electric vehicles with several kW of coupling, I would not be as confident about side effects.

We live in a peculiar world where new technologies (or re-purposed old technologies) have the habit of showing up in consumer goods without much fanfare or information.  We are expected to buy them on face value and just accept that they are safe and have low impact on our lives.

Frankly we should maintain a healthy scepticism and be prepared to look deeper.  On this occasion, I have put these concerns to rest.  What shows up next may be a different story.

Last year I put the RF-Explorer (handheld spectrum analyser) alongside induction chargers for a mobile phone and toothbrush…  the results very much aligned with Ian’s tests.

Low level RF interference was observed from below the 160m amateur band.  Moving 10-15cm away from the charging unit and the noise became imperceptible. 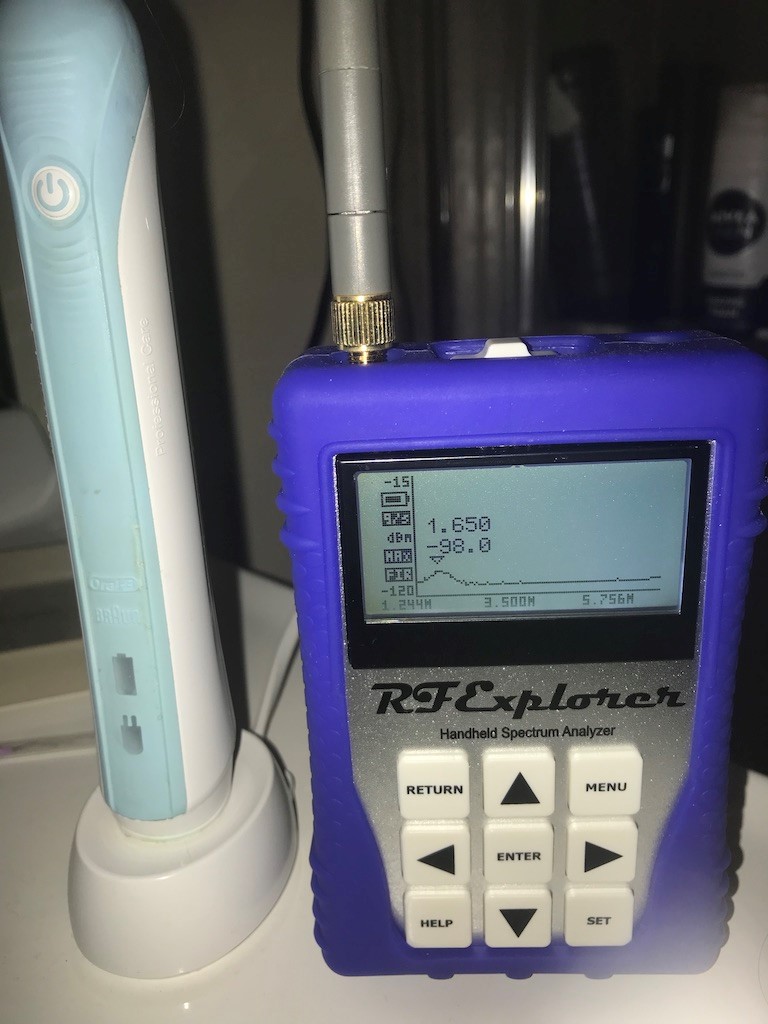 RF Explorer and a wireless charger for a toothbrush 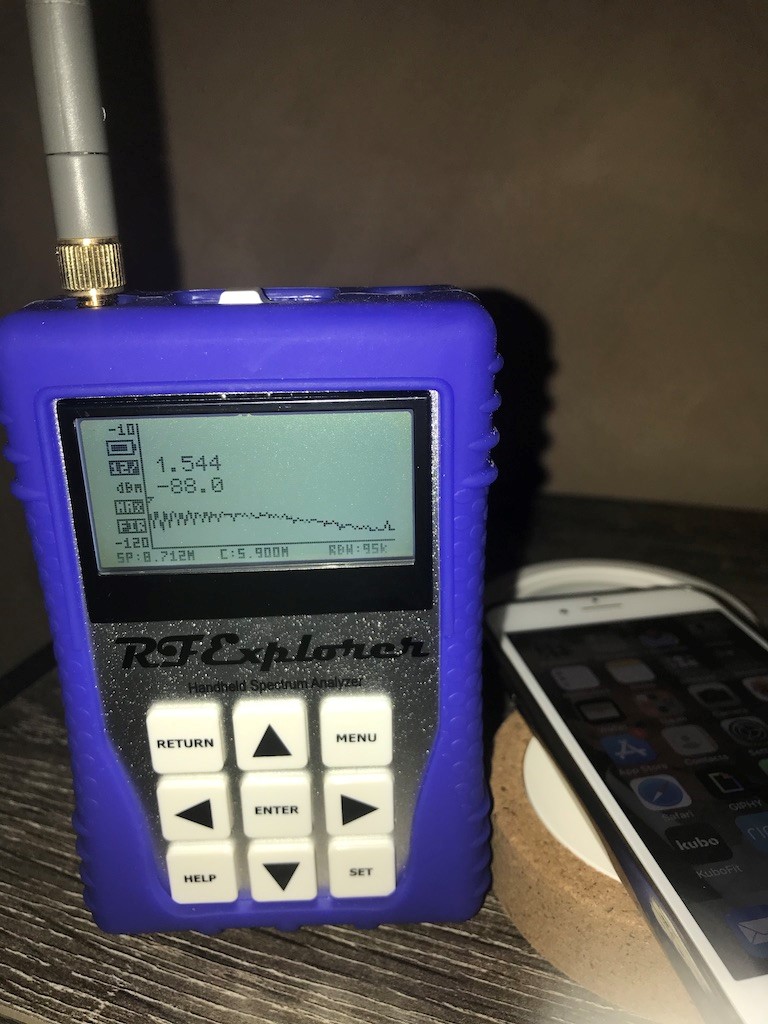 RF Explorer and a wireless charger for an iPhone